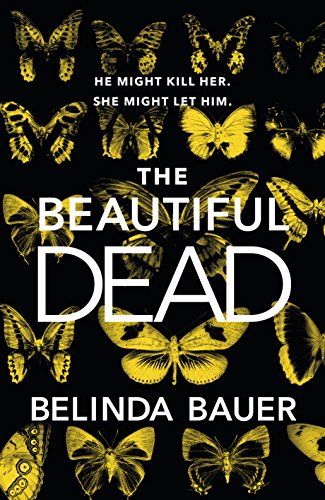 Eve Singer needs death. With her career as a TV crime reporter flagging, she’ll do anything to satisfy her ghoulish audience.

The killer needs death too. He even advertises his macabre public performances, where he hopes to show the whole world the beauty of dying.

When he contacts Eve, she welcomes the chance to be first with the news from every gory scene. Until she realizes that the killer has two obsessions.

One is public murder.

Belinda Bauer’s The Beautiful Dead follows TV crime reporter, Eve Singer as she gets up close and personal with a killer. This serial killer has taken a particular liking to Eve and feels a connection to her. He wants her help staging his kills, to reach a wider audience. The killer is sadistic and strange, as we see in the opening scenes. A woman loner worker is hunted to death in her office.

It is hard not to grow fond of Eve. She may be determined to stay in her job, to beat the younger prettier reporters on her tail. We see she has a caring side and she isn’t as confident, as she initially appears. She lives with and provides care for her father, who suffers from dementia. We also see her interacting with her neighbour, a lonely widower, Elias.

This is not your standard serial killer story. It is beautiful. It reads like a dream; with characters you gradually find yourself loving and an inevitable build up to the final confrontation between the killer and Eve. Laced into all of this is a subtle dark humour. You really can’t go wrong with Belinda Bauer. Recommended.

Reviewer with a mind of her own. This is a collection of book reviews, which started in 2014. Mostly crime and odd other genres thrown in. Some I loved. Some I loathed. You get the picture.
View all posts by Northern Crime →
This entry was posted in serial killer, thriller and tagged belinda bauer. Bookmark the permalink.