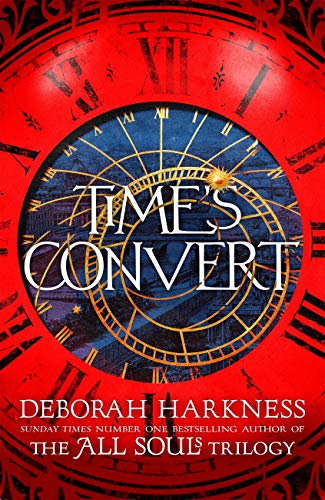 From the Sunday Times Number One bestselling author of A Discovery of Witches, now a major Sky original production, a novel about what it takes to become a vampire.

From human to vampire …

Marcus Whitmore was made a vampire in the eighteenth century. Over two hundred years later, he finds himself in love with Phoebe Taylor, a human who decides to become a vampire herself.

But her transformation will prove as challenging now as it was for Marcus when he first encountered Matthew de Clermont, his sire.

While Phoebe is secreted away, Marcus relives his own journey from the battlefields of the American Revolutionary War, through the treachery of the French Revolution to a bloody finale in New Orleans. His belief in liberty, equality and brotherhood challenged at every stage by the patriarchy of the de Clermonts.

What will he and Phoebe discover in one another when they are finally reunited at Les Revenants, beneath the watchful gaze of Matthew and his wife, Diana Bishop?

Sunday Times Number One bestselling author Deborah Harkness returns to the spellbinding world she created in A Discovery of Witches and, through the prism of an unconventional love story, explores the power of tradition and the endless possibilities for change.

For anyone that little bit obsessed with A Discovery of Witches, Time’s Convert is an essential read. I include myself in that. I love the weaving of fantasy and history. I wanted that little bit more of Diana, Matthew and the world of Deborah Harkness. Pure magical escapism.

Time’s Convert has a very different emphasis to the Discovery of Witches trilogy.  Whether you appreciate it or not, will depend on how you much you like Marcus and the domestic life of the Clermont-Bishops. We see Matthew Clermont and Diana Bishop again, together with their growing family. Matthew and Diana are raising children, who have a peculiar mix of talents.

This is very much a standalone about Matthew’s son that he sired, Marcus. Siring for the uninitiated simply means that Matthew made Marcus into a vampire. Marcus is now in relationship with a human Phoebe. Phoebe wants to become a vampire, to share her eternity with Marcus. We follow this transformation and the weird rules to ensure this goes according to plan. Who would have thought vampires would be subject to so many rules and regulations? We find out about Marcus and his past, from his troubled home life to the battlefield experiences that shaped him. I was most interested in Marcus and the way he ducked and dived to survive the American Revolutionary War. He is a vampire, with a social conscience. His encounters with Matthew were enlightening.

This was a welcome little addition to the All Souls Trilogy. As I have only just read them, I felt it followed on very nicely. Personally, I was more interested in the historical aspects of the story than the domestic bliss of Diana and Matthew. Obviously you would be stupid to go into this blindly, without having read the original trilogy. You would be totally befuddled.

Reviewer with a mind of her own. This is a collection of book reviews, which started in 2014. Mostly crime and odd other genres thrown in. Some I loved. Some I loathed. You get the picture.
View all posts by Northern Crime →
This entry was posted in fantasy, historical, Uncategorized and tagged Deborah Harkness. Bookmark the permalink.
%d bloggers like this: